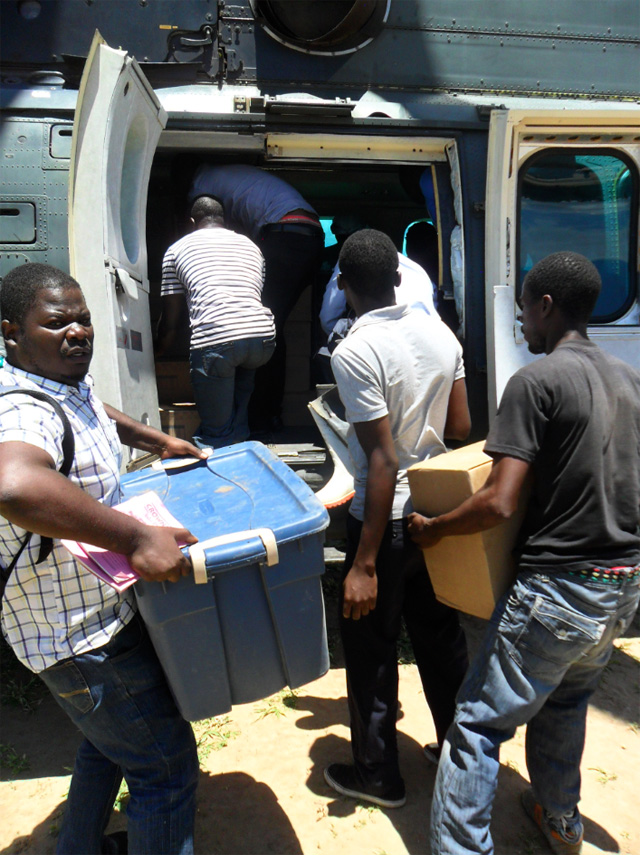 By Founder and President Kurt Dahlin

The United Nations News Center reports: This year’s rains have come ahead of their usual schedule, repeatedly bursting the banks along the Shire and Ruo rivers. http://www.un.org/News/

There has been brutal damage to homes, schools, medical clinics, roads and bridges. An estimated 116,000 households have lost their crops and livestock. The official death toll is 200 but still there are over a hundred people missing. 200,000 Malawians have been displaced. In Nsanje district alone, 79 people are confirmed dead with another 153 people still missing.

Helicopters are flying resources daily into the areas that are still inaccessible by boat or road.

When I learned of the flood, I spoke on the phone with our Malawi staff member Edwin White. I was very thrilled to discover that Edwin and our associate Isaac Chikonde were already helping people in the heart of the devastation at a refugee camp for over 4,000 in Osiyana, east of Bangula near the confluence of the Ruo and Shire Rivers.

There are at least five villages stranded by the floods. It is still the rainy season and was raining “badly” when I called. All the farms and entire villages in the area were under water. One village chief told Edwin that he and his fellow villagers had climbed up into trees for four days. The chief saw people fall out of the trees from hunger and be swept away. He estimated that at least 20 died but the exact number cannot be known. Two women gave birth during the height of the rains (one in a tree and the other in a church). Isaac, as a medical professional, has been helping them. They also supplied the ladies with much needed blankets.

The next day, at a health clinic, Isaac and Edwin distributed 8,500 packets of Waterguard powder to local residents and instructed them on the proper use for water treatment. Presently, they are collecting rain run-off from tarps and tents for drinking water. The water treatment kits are not nearly enough for the amount of people left homeless by the cyclone. Edwin will return to Blantyre and purchase a greater supply of Waterguard. There are none available in Nsanje.

The corn crops are ruined and it might be too late to re-seed. The flood waters have deposited sand covering the farmers’ fields. The local farmers told Edwin that this was another setback and bad for farming. “It would have been better if it were mud.”

The Osiyana refugee camp is in the Makhanga area completely submerged by 2-3 meters of violent flooding.

The District Environmental health officer for Nsanje told Isaac that people are literally drinking dirty water from the river because their water well is broken.

On January 23, 2015, missionaries David and Joanna Morrison reported on their website that “22 camps, now housing 68,000 displaced people have been established in the Nsanje district. 27,600 are children, and 618 of the 10,740 displaced households are headed by children. Their parents have either died or they are stranded at another camp.  There are more camps in the neighboring district of Chikhwawa directly north of us. Most of the camps have been established at public primary schools so school children are still suspended from classes.”

I pledged our commitment at WWFA to continue to help the people of Malawi through this catastrophe so they can regain hope for a better future.

Helping Up Not Handing Out,

Your donations are greatly needed and much appreciated!